Ikeea* Insurance is offering a 17.86% “Ufdah” discount for anyone that can prove that their family tree originated in Sweden. This Ufdah discount coincides with the 225th Anniversary of the Swedish Lutefisk Revolt, when the King (Carl Oscarson AKA King Ole) placed a tax on meatballs in white gravy and the peasants revolted. During the uprising, the Swedish population ate nothing but pan fried trout. After a 15 year struggle, King Ole compromised and ended the tax on white gravy, but continued the tax on the meatballs.

Needless to say the Swedes were so sick of fried fish that they were desperate for something different. That’s when a Lutheran Minister (Martinson Lutherson) nailed his menu to the church bulletin board advertising a hot dish supper of boiled preserved fish, drenched in white gravy. Of course, everyone attended, including King Ole.

When the fish was served covered in the gooey unseasoned gravy, the crowd roared. “Oh min himlarna, det är för tjocka” (Oh my heavens, it’s too thick!) The King sensing the crowd getting riled relented and proclaimed these memorable words… “Låt det bli köttbullar!” (Let there be meatballs!) and the Swedish Meatball Supper was born! 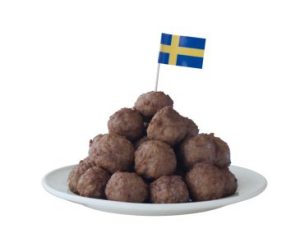 To qualify for the Swedish Ufdah Discount (and to make sure no Norwegians are trying to pose as Swedes) a complete family tree proving Swedish Heritage must accompany the application along with two tater tot hotdish recipes.

For sure this discount is available only on April Fools Day and then only to those with a sense of humor – You Betcha!

*Ikeea Insurance is not associated with any retail establishments and exists only in this advertisement. For further information on this fictional discount, please contact Clarence Holm at The InterAgency.

This site uses Akismet to reduce spam. Learn how your comment data is processed.