“If your daily life seems poor, do not blame it; blame yourself that you are not poet enough to call forth its riches…”

Go forth each day to catch the wind,
And fill your soul with life’s glory.
Today shouldn’t be where you’ve been,
It’s what you offer the story.

Days of indecision and drifting currents cause an eddy to lament
Swirling pools of thoughts, considered then pushed aside.
Calm streams offer no challenge, just relaxed consent.
A journey squandered; life’s thrill has been denied.

Heard a gentle tapping on the glass patio door,
My cats have been prowling; now back to report their score.
Standing at the doorway, doing their nightly dance
A three-count, two-step; one paw left in a stance.

And from a different corner two other cats loudly yowl
A street lamp shines a spotlight and shadows start to fall.
Felines begin to polka, three dips including a twist
A howling country cat ballet, ending with Toms dismissed.

I slid open the squeaking door; shy cats vanish in the night,
Abandoning our Pete and Charlie before a hint of light.
As quickly as possible the pair enter scrambling to their bowl
The seemed a little shaken, the encounter had took its toll.

Sniffing at the kibbles, lapping a quick drink,
They both eye the hallway no need to think.
Naptime’s over yonder just atop the cover,
Sleeping till tomorrow or their nerves recover.

Publikworks is passionate about his call to action featured in the February 25th blog “Stop That” https://publikworks.wordpress.com/2015/02/25/stop-that/ He believes the word “that” is being foisted on the public in what is a grammatically senseless act. Publikworks makes an impassioned plea to omit “that” when it is inserted unnecessarily into a perfectly good sentence.

Redundant redundancies occur frequently in life, but I do find it odd Publikworks focuses on “that” when there are multiple equally senseless actions taking place at any given time. For instance quotations “” marks used to assign credit to an original work. It is my contention nothing original has been written since papyrus was introduced. As Ambrose Bierce was fond of saying, “Quotation, n: The act of repeating erroneously the words of another.”

In order to extend the superfluous work begun by Publikworks I would like to offer other useless personal items that I am constantly called upon to employ.

Keys – I have pockets full of them that I need every day! In fact, I have multiple drawers full of keys I may or may not need. I am afraid to throw them away, due to worries I may encounter a lock securing something I’d forgotten I needed.

I question the entire idea of keys. Much like a “Key to the City”, we all know keys don’t do much. The idea that a thief is going to be stopped by a simple lock and key seems like quaint logic. Especially since everyone knows most doors can be kicked open easily or defeated with a handy bobby pin obtained from a beautiful assistant.

In short, keys are made to bother honest people and as Diogenes discovered, they are hard to find.

Coins – The handful of metal mixed with your cash you drop between your door and the McDonald’s drive-up window you can’t retrieve because your car door won’t open wide enough to get your hand out and who really cares about that little bit of money anyway.

Working together with your keys and possibly a wallet, the only practical reason for loose change is to act as ballast to your pants, making sure that your inseam doesn’t ride up into your crotch. Of course that extra weight necessitates the addition of a belt to counteract the downward thrust of the coins.

Besides what good are coins anyway? Years ago as a youth, I began placing my coins into a can to save up for a good bike. Now 40 years later, a good bike costs many thousands of dollars and I am still putting coins into cans to save for it.

Wallet – That rare blend of leather (pleather?) and acrylic sleeves used to hold currency, credit cards, photos and identification cards. Most men carry theirs in the right back pocket and believe women are attracted to the sight of a particularly bulky one. Some men carry big long ones with snaps that are so bulky, an additional chain is employed to guard against woman who frequent truck stops.

The absolute need for a wallet is questionable at most. Identification and credit information can be achieved with a small implant. My cat (Charles) recently had one of those installed at the same time he was fixed, All of Chuck’s information is available through the use of a simple hand scanner and as an added benefit, he no longer wants to pee on everything.

While this is not a complete listing of useless or redundant items I feel they represent the type of items which should be eliminated through judicious pruning.

Remember if a magician really needs an assistant, why does he need to make them disappear?

20 years ago I experienced a major stroke, which left me temporarily bereft of most memory. For a brief time I floated in a world that had no children, no spouse, no language, no art, no history. It was as if I were a computer that had lost it’s hard drive.

Thanks to the wonders of modern medicine and the then experimental procedure of TPA, my memories slowly returned. However it left me with a lingering suspicion of reality. I now understand just how tenuous the relationship between truth and my ability to recall truly is. In fact, during my recovery I walked the line between reality and fiction every day. I learned when facts fail, recollections of sights, smells and sounds endure.

I came away from the experience with an appreciation of facts, but still I found an even greater love of recollections with all the subtle enhancements my senses can add.

A continuing part of my recovery over the years has been to accept and appreciate my inability to remember superfluous facts. I now relish my enhanced recollections and learned to live in a world that is guaranteed to be better as it ages.

Memories are fleeting moments here on variable loan,
They are not frozen images chiseled into solid stone.
They are the lingering taste of chocolate on the back of my tongue.
Or the warmth I felt at noon time, as I looked into the sun.

Recollections are celebrations, a party for one’s self
Heady compilations pulled from a top most shelf
The best are fragile moments pulled from our past
Colored by experience with thoughts that are often recast.

Recollections are built from history liberally enhanced by our dreams,
Memoirs of bits and pieces all exploding from the seams.
Photos stand as sentries, highly focused on the details
Memories work with senses making stories to fill our sails

Celebrate your memories sans worries of trivial facts,
Don’t sweat the story of what happened between the cracks.
Just sit back and taste the chocolate and feel the shinning sun
The best memories should always be the most fun.

I recently learned of the Japanese tradition of “Kintsugi” literally meaning “the golden repair”. Kintsugi (or Kintsukuroi) is the art of restoration of broken pottery, utilizing either gold or silver in the repair, thereby increasing the value beyond its original cost. An object many would consider not worth fixing is repaired- and in the process is transformed into precious art.

I thought about this for a moment and realized that anyone can create a golden repair.  That same philosophy could be created in a simple personal way. It would not require a lot of money or even time. It could be done as easily as saying thank you to a waitress or smiling at a stranger. It is just a matter of projecting a simple precious moment into someone’s life.

By that simple act an average instance can be transformed into a special moment that can be shared and passed on to others. Just think of the impact that could be made by just sharing a smile and creating a special moment for a stranger today.

“Man is born broken. He lives by mending. The grace of God is glue.” 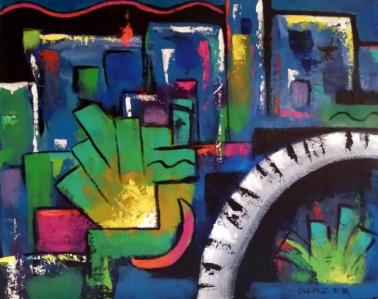 My thoughts kept churning in my head last night
Fleeing from nowhere, my directions weren’t right.
I had reached for stars but they’d slipped away
In searching for dreams, most thoughts had gone astray.

My life and my decisions hang with me today
Those choices, that Karma, are flowing my way.
An existence held prisoner by risk pushed aside
A lifetime full of pathways and doors left untried.

What a waste of a future, a fate left untested
A hardship, a friendship, risk left arrested.
A life of avoidance, a song with no dance
A boring existence – this adventure sans chance.

There are two tragedies in life. One is to lose your heart’s desire. The other is to gain it.
― George Bernard Shaw, Man and Superman

Imagine a world where every device is broadcasting a signal with a message that is tailored to your desires. A pop machine senses you are nearby and displays on a LED screen an offer of a Diet Dr. Pepper (your favorite). The parking meter identifies your car, checks national identity records to see if you qualify to park there and then reads the smart credit card in your wallet and deposits enough money to cover parking for a football game you plan on attending. Finally when you return home, the house lights go on, the garage door automatically opens and the television accesses Netflix with the latest movie you been seeing ads for that are programmed expressly for you.

In July 2014 Qualcomm Technologies, Inc. announced an always-on digital 6th sense named LTE–D. It uses include discovery services that will employ device-to-device technology to broadcast messages to receptive components in the immediate proximity, potentially offering exclusive values to nearby prospects.

This is not the future we’ve dreamed about; it is the reality of our age. All of these devices are available now or on the wish list of the neighborhood supermarket deli manager. It pretends to be just another means of marketing.

Every Move You Make, Every Step You Take, The World Will Be Watching You

As we descend into a digital version of The Truman Show, everything you hear or see is customized to appeal to your desires. Your normal becomes the standard! Suddenly your world is rosy and well ordered. It’s like shopping on Amazon where your desires are anticipated based on past purchases, or like Netflix – where viewing suggestion are offered specifically for you based on your searches and downloads.

This future, based on positive affirmation featuring your thoughts and deeds, offers the potential fragmentation of society into like social groups usurping the need of greater consensus. National identities may disappear, replaced by legions of digital tribes loosely affiliated to their preferred browsers, browsers that set the standards and rules as to what is truly important and relevant.

It appears digital freedom comes with a price and that price may be virtual enslavement.