This week challenge is to write a story of no more than 500 words, written from a child’s perspective of an adult situation. 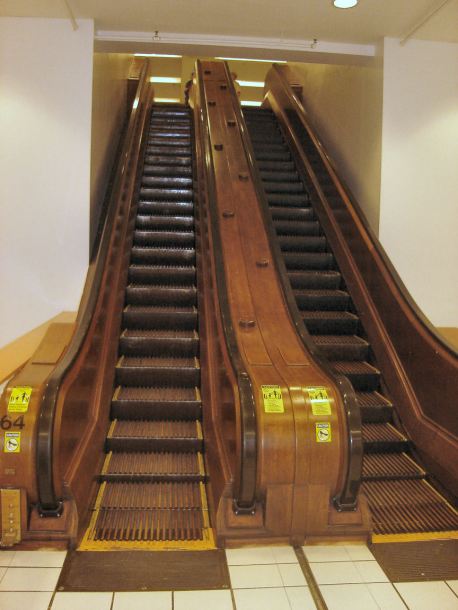 The escalator squeaked as it rose from the floor. It reminded me of mom’s clothes dryer when a load was in it. Just like the dryer, the treads would squeak when they worked harder.

Each time another silver-haired lady would leave the beauty shop, to go back to the main level of the store, the steps would slow a bit and the squeak would get higher.

I kept wondering how long it would be till mom’s hair was done and we could get on the stairs to go?

The lobby of the beauty shop always smelled the same. It was like when we dipped Easter eggs in colored dye and vinegar, except someone must have spilled a bottle of perfume down here. To make it worse, a couple of the men waiting for their wives were smoking and the cloud was getting thick. I liked the smell, but it did make my eyes burn.

The squeaking slowed again as another blue haired lady left the shop. I recognized her from Sunday school and waved goodbye as she rode up and on her way.

I looked again at the pile of magazines next to me. They were the same ones that were here last week. Debbie Reynolds was on the cover of one and the other featured a big advertisement for Swanson’s Heat & Serve Turkey Dinners.

The man sitting next to me stomped out his cigarette and grabbed another one from his coat pocket. His Zippo lighter swished open as he flicked his wrist. He lit his cigarette and put the lighter back in his pocket. My dad has a lighter just like it, that he said he got in Korea,  every once in a while he would let me twist the wheel to make it spark. It was hard to do, but I was getting better at it.

I felt in my pocket and traced the outlines of the two pennies mom had given me this morning. She told me, if I were good, she would give me three more. That would be enough for a whole bag of candy from the Red Owl candy aisle. My favorite was black licorice pipes. I pretend to smoke them just like dad did when we watched baseball on Saturday afternoons. I remembered when dad burnt his hand cheering Mickey Mantle’s home run hit.

I wished there was a clock on the wall, so I could tell if we had enough time to go for a soda at the drug store down the street. If mom finished up in time, she might take me. My Aunt Evelyn worked there. She always gave me an extra scoop of cherry in my soda. I got thirsty just thinking about it.

Just then the beauty shop door opened and my mom came out. She looked at me a smiled and mouthed the words “How do I look?” while she modeled her new hairdo. I smiled back at her.

She grabbed my hand and we left together. The escalator squeaked as we rode up to the next floor!